Thank the stars for that!

We can get back to doing what we were doing.

Note to self: NEVER do the Twelve Days of Christmas as a theme EVER again…!

So hopefully we are all back to some kind of normal now – well I would like to hope anyway. Today – the eve of Epiphany is the day that the decorations should come down. Or maybe it’s tomorrow. But if not tomorrow then you must leave them up until Shrove Tuesday when the come down and you burn them in order to cook your pancakes over them.
I’m not sure if I want to say what a load of nonsense or not. I think it might be to be honest. Simply working things out to suit our own timetable of events and specific days. Suffice to say, if you still have your decorations up today, tomorrow or even a Tuesday in February I wouldn’t think they will be looking too clever so it’s probably best they are taken down as soon as possible before the pine needle infestation takes hold and you are still finding them in the carpet the week before you put up this years tree…

Any hoo, enough of that!

We are here for one thing and one thing only today.

How does Partridge, Dove, Chicken, Calling Birds, Geese and Swan pie sound? All in a home made creamy sauce… A sure fire way of getting shot of all that bloody poultry….. 😉

Okay then, how about today we make Chicken With Lentils And Rosemary. A one pot wonder meal plus Veggies.

Did I say Veggies?

Yes! And lots of them so listen up and learn how to make the easiest meal you’ve made in years….!

First take the casserole dish and put on the hob. Put some Olive Oil in and turn to a medium heat. Also pre heat the oven to 180˙c.

And add to the now hot Olive Oil.

Whilst the Onion cooks, measure out 200gms (the dish weighs 49gms 😉 ) of Red Split Lentils. 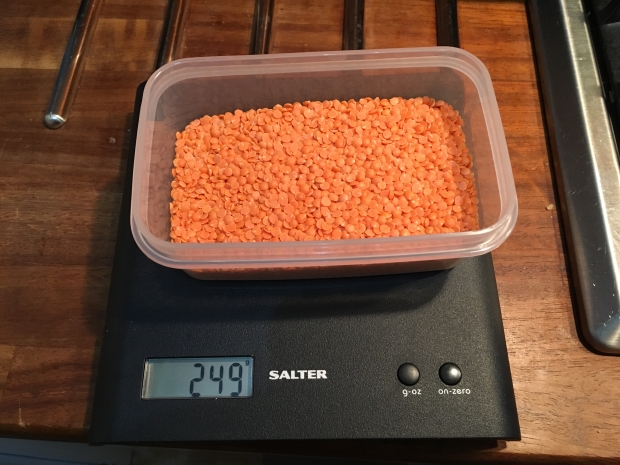 Once the Onion is nicely browned add the Pink Himalayan Salt.

And the Cracked Black Pepper to the browned Onion. 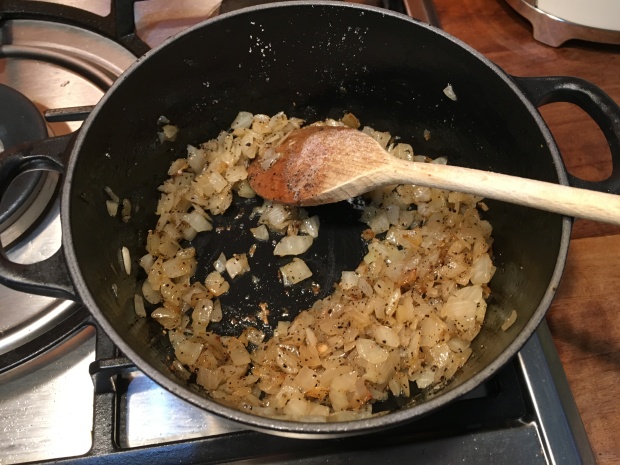 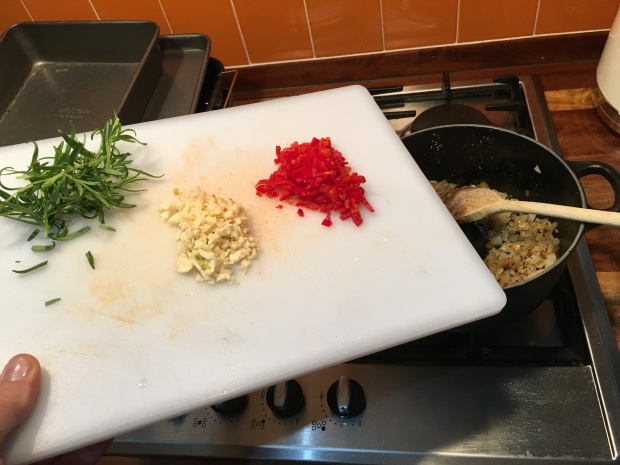 Then add the 200gms Red Split Lentils and mix in.

Followed by the 500mls of Chicken Stock.

Leave this to simmer for five minutes and as it does so remove the cover from the chicken thighs.

And then season with the Pink Himalayan Salt and the Cracked Black Pepper.

Add these seasoned Chicken Thighs to the mixture and leave to cook on the hob for a further five or so minutes. 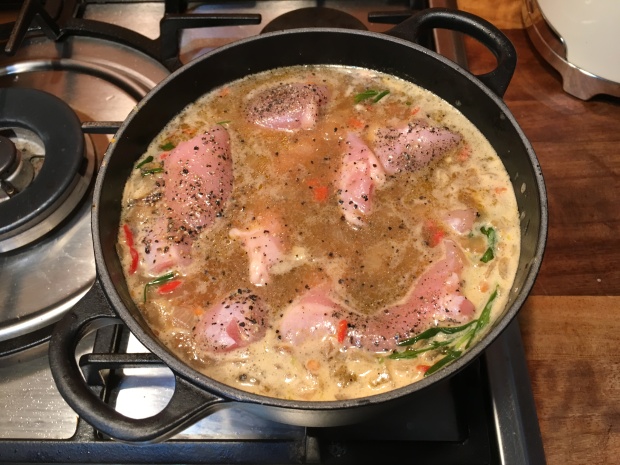 Place the lid on the casserole dish and put in the oven on the middle shelf for a further 60 minutes or so – at least until the Lentils are soft and the Chicken Thighs cooked. 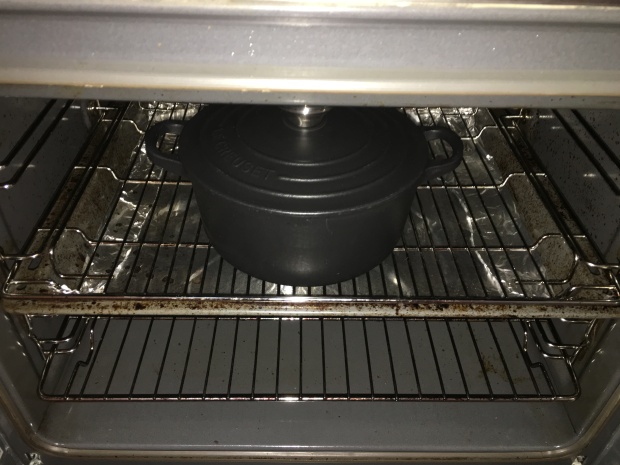 As this cooks, prepare the mixed Veggies in the steamer.

Put the steamer on the hob and cook until the Veg is just done to a shade past Al Dente…! 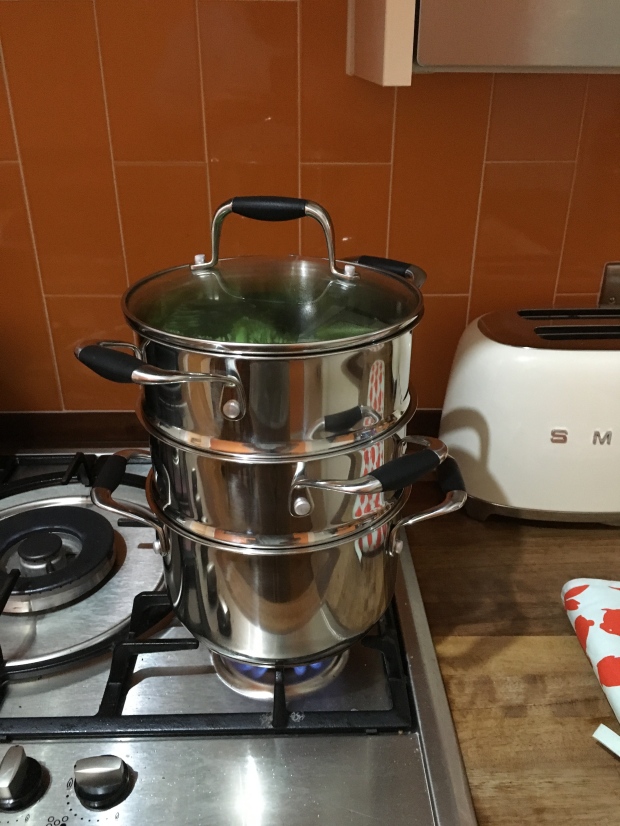 Remove the Chicken, Rosemary and Lentils from the oven. 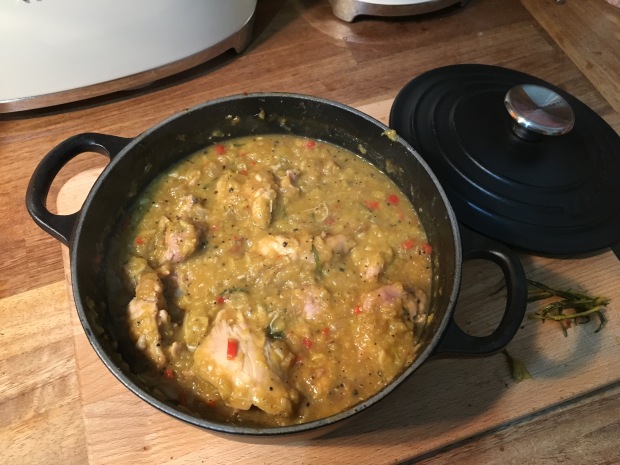 Remove Veggies from the steamer and season. 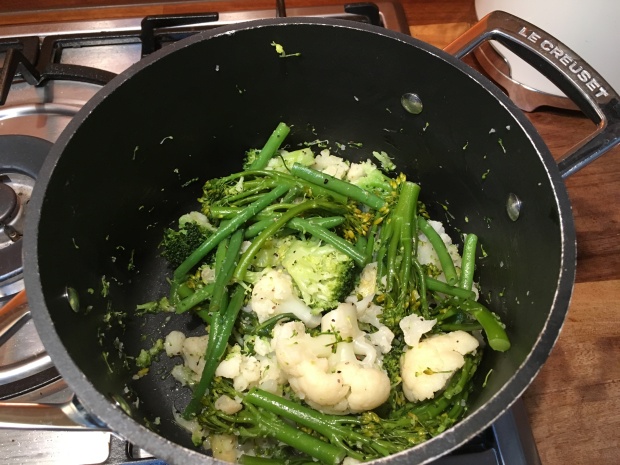 With the Chicken, Rosemary and Lentils. 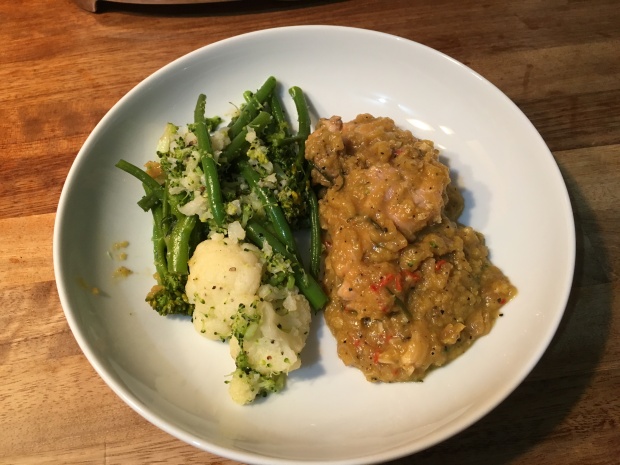 This is one of THE nicest meals I have ever prepared!
It really is absolutely amazing and so healthy it doesn’t even begin to consider fat as an ingredient 😉
Please do try this one this month, it is totally delish….!

16 thoughts on “Tasty Tuesday On The Twelfth Day Of Christmas….”