Good morning world and welcome to a new week here on planet earth.

Sorry for being a bit late on parade with this post but I had my office decorated over the weekend and therefore had no where to type until later last night, by which time I was absolutely shattered!

Still, we are here now so lets enjoy the Sunday Stroll together shall we?

Yes I know for some of you your working week may have begun a good while ago and for others, as this posts, you are still enjoying your Sunday evening…. but then that is the beauty of having a blog that stretches around the globe… 🙂

So anyway, yesterday/this morning (delete as necessary) I decided to take a good walk now that I appear to have my energy levels back on the rise, so the dog and I did a circuit we have done a couple of times before but unusually we did it in reverse (which meant walking UP a killer hill) and we did the entire trip from and back to our front door rather than driving somewhere to leave the car and head off from there.

The jaunt started off on some of our usual lanes but looked more especially pretty than normal due to the lovely Autumnal tones that are sweeping our countryside at present.

Even the sunlight has changed and makes the colours appear to glow much more than normal.

And it wasn’t long before we were headed down lanes that at this time of appear to give a “tunnel” like feel as you walk through them, with glorious browns, greens, rusts and reds all bending over to help with the illusion.

As the colours change and the leaves fall, so the ponds and watering holes begin to fill once more ready for the next cycle of life. 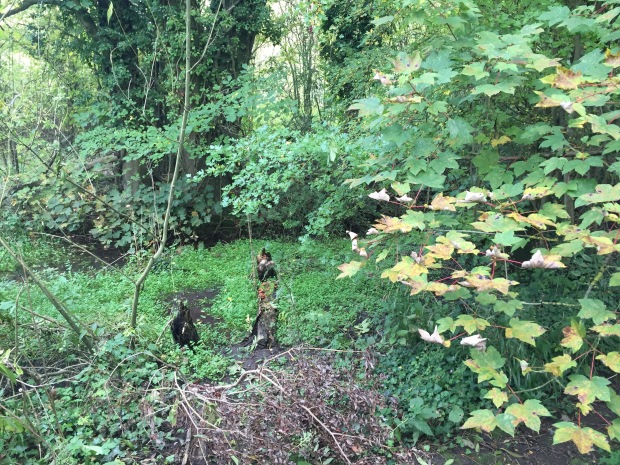 And with all of the fields cut back and ready to be ploughed, the outlines of multicoloured trees becomes only too recognisable.

And at the end of this lane we start to see the hill we must start to climb in order to make our way up to the Ridgeway. 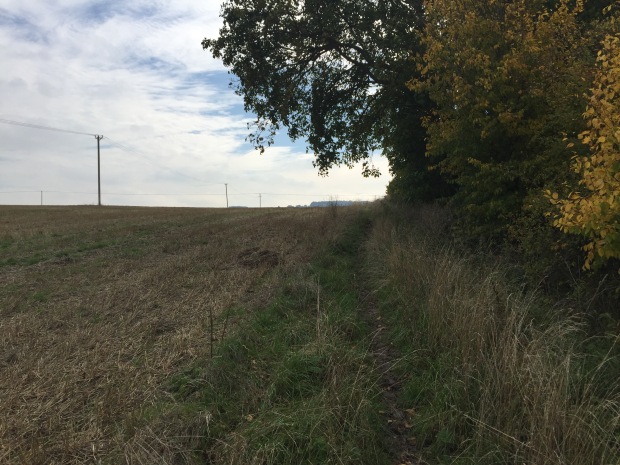 Which becomes more apparent with each step upward because we must start to make our way up to the treeline in the very background of the picture.

Again the changing of the seasons become all too apparent as we see the fields harvested of the corn that grew on my last trip along this footpath. 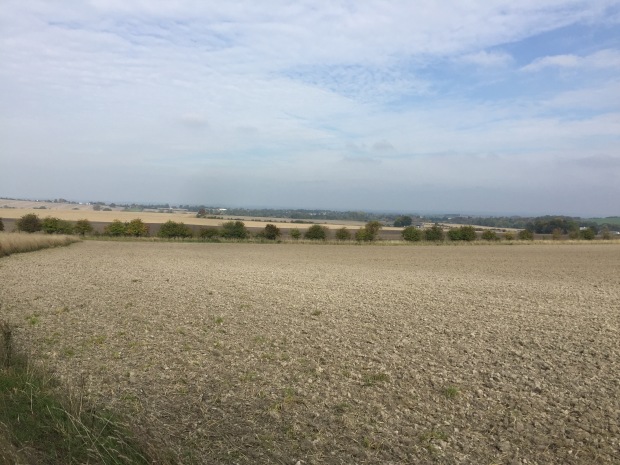 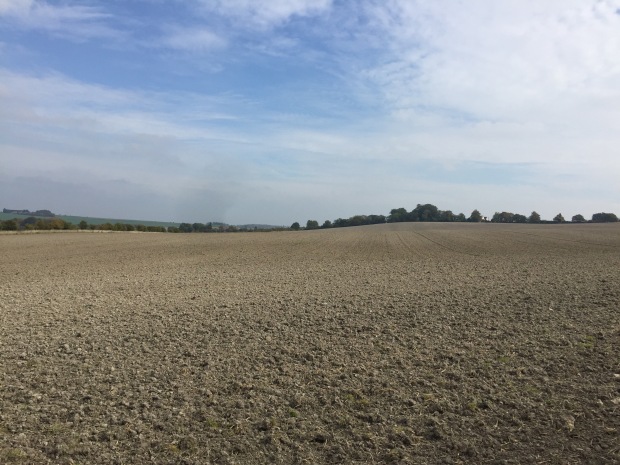 But as we start to make our way farther up the hill the views become all the more worth it for sure. You can just see Archie the Dog at the bottom of each picture showing signs of having had enough. 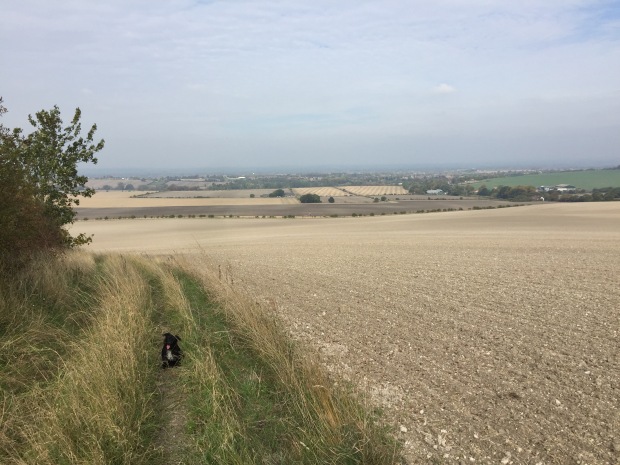 But when you get to the top, the view is spectacular. 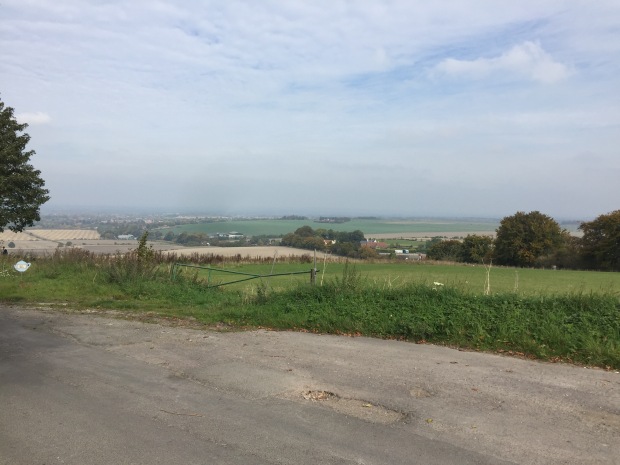 Unfortunately it is at this point that Archie has to leave the Sunday Stroll before it all gets a bit much for him so my Mother very kindly met us on this last piece of road before I hit the Ridgeway itself and started to follow the lanes and the tracks hewn out over thousands of years of footfall. 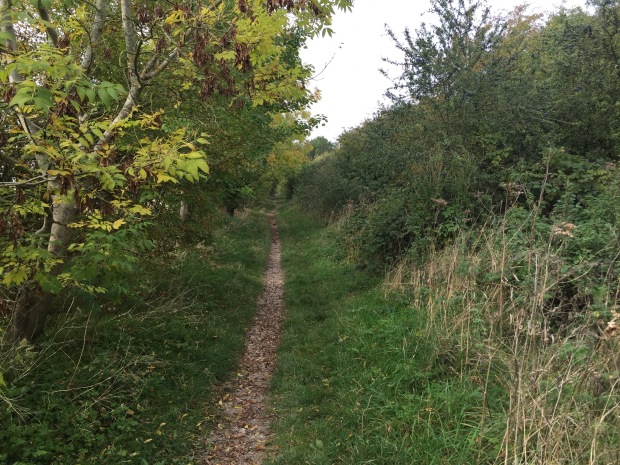 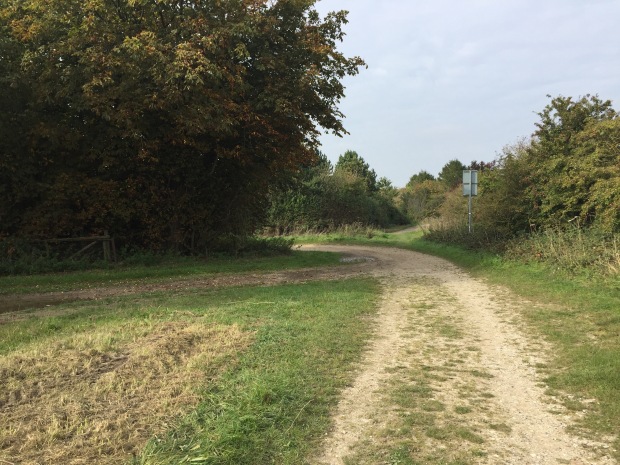 And once again the changing colours of time were in abundance as some of the best views in the world were on offer and all for free! 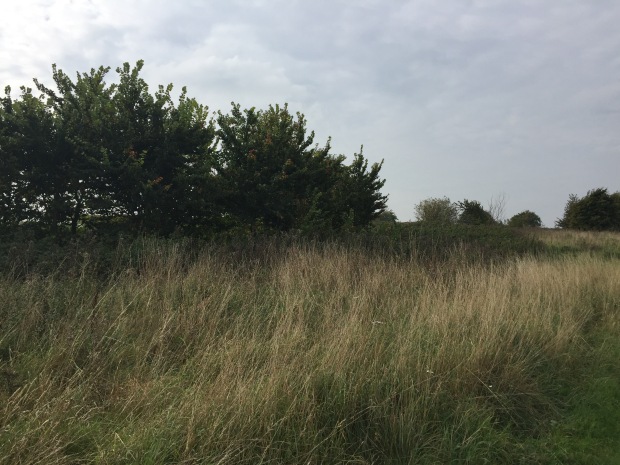 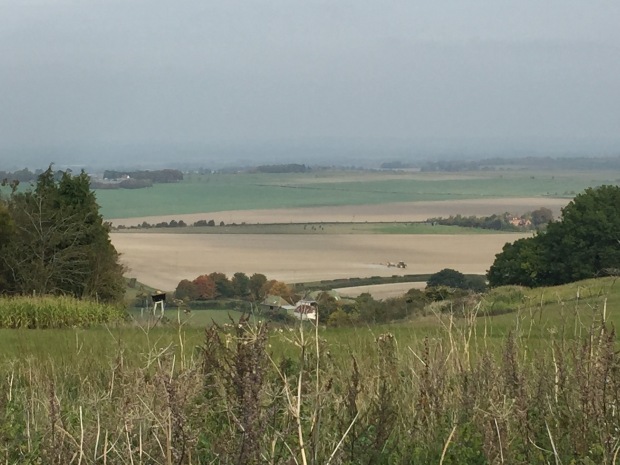 And they just kept on coming as I continued after dropping Archie, to make it to the next landmark of the walk, the Monument to Robert Lloyd Lindsay which has featured here many times before. But even without my little pal to keep me company it was still enjoyable because of the countryside. 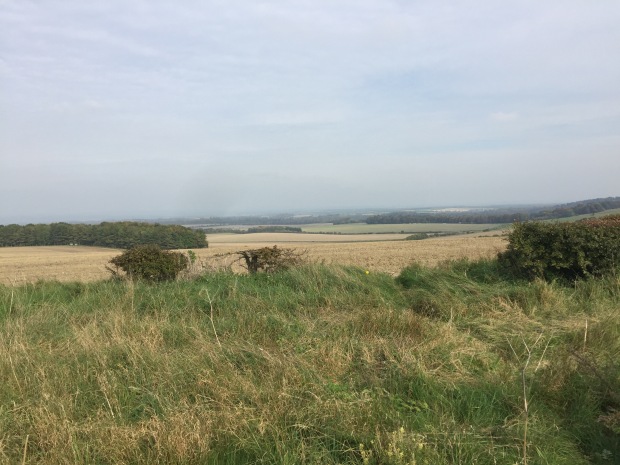 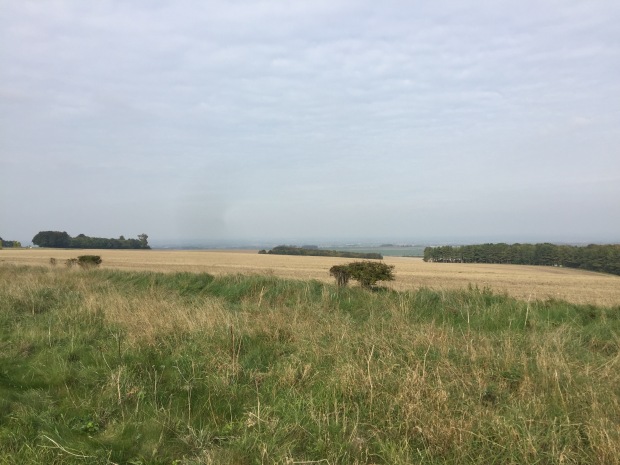 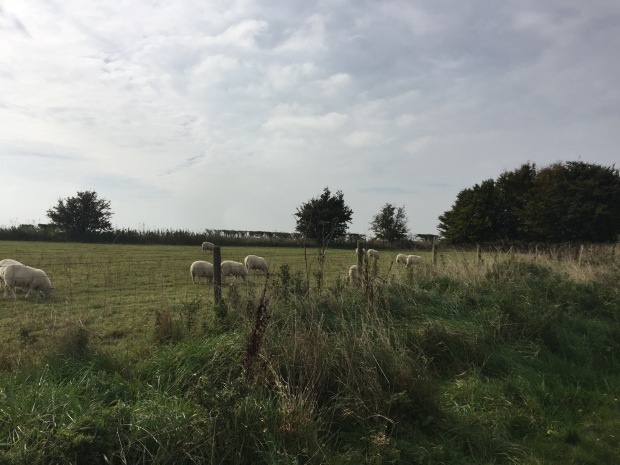 At the next step of the trail we are presented with a map so to give you some idea of my trek I have included it for you below. I started in Wantage and headed through Letcombe just missing Segsbury camp (an old Iron Age fort) making my way up to the dark red line which is this stretch of the Ridgeway. I then walked along to the “You Are Here” sign and made my way back down to Ardington opposite the Lord Wantage Monument, before turning left back into Wantage for a feet up with a cup of tea 😉 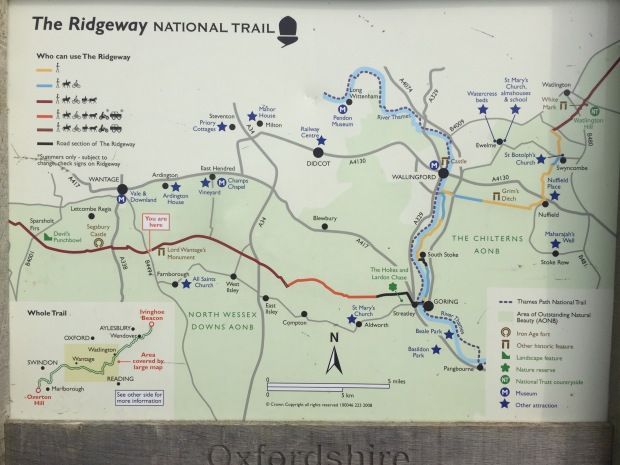 Turning off of the Ridgeway opposite the Monument took me along another new footpath that I have not travelled before and around the outskirts of a newly ploughed field surrounded by more of the spectacular changing colours of nature, as I headed once again for the tree-line in the distance.

This brought me out to a well worn path I have trodden many times before but never consciously aware of such glorious colours which unfortunately a camera phone doesn’t completely do justice! 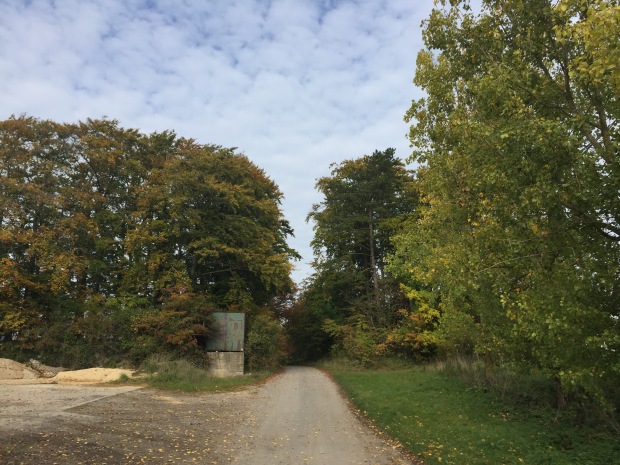 I was soon however back on the road to civilisation walking along an avenue littered with Conkers (Horse Chestnuts) that had recently fallen from the trees. Amazingly I still felt the urge to pick them up as I would have done as a small boy but having nowhere to put them apart from my pockets, I decided best to leave for a child who might use them instead even though as a small child I am sure I would have been happy filling those same pockets until they were ready to burst! 😉

And once again as I started to walk back into the reality of housing and away from the countryside, I was still presented with more and more material to show how wonderful the area in which I live, truly is. 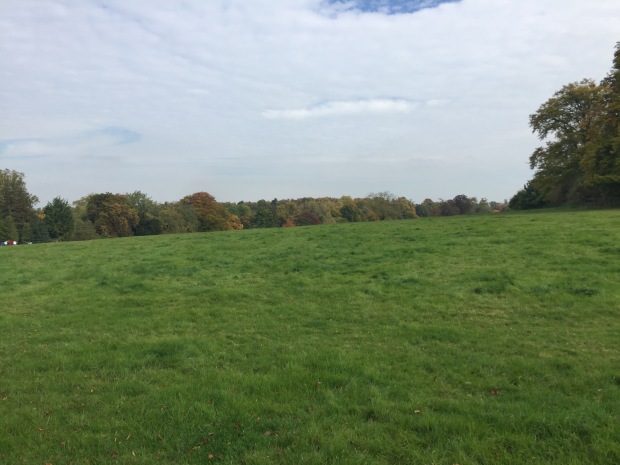 Where although it it is private land, it looks like they still keep sheep on the village green… 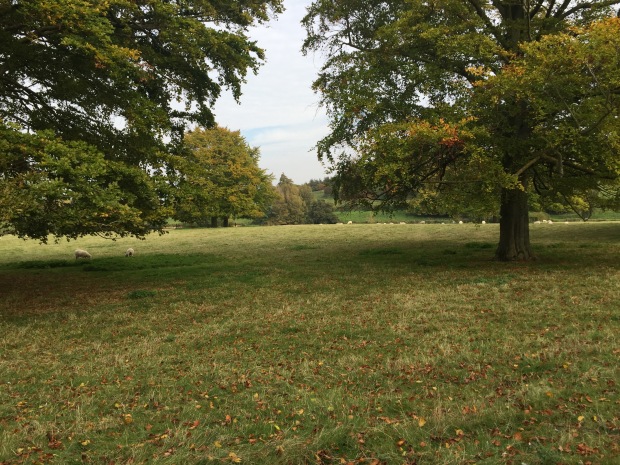 And with the above parting shot of the countryside and the below final hurrah before I met the tarmac of everyday life.

It was time to hit the plain pathways (sidewalks 😉 ) of my locality and head on home for that long awaited cuppa.

I hope you enjoyed todays pictures as much as I enjoyed being there in the flesh taking another Sunday Stroll.

So Saturdays food was actually not too bad even though there was a Roast Dinner with all of the trimmings and a Dessert that was so good, I found I wanted to eat and eat and eat it! Lunch nearly didn’t happen as the day ran away with me although I managed to fit it in between jobs and I was pleased I only munched on two small pieces of cheese whilst I waited for my Roast Dinner to cook.

As for the exercise, well the Sunday Stroll took me far and wide on a journey I have never done before, well, not in the direction I chose and certainly never before without leaving my car at one point on the walk and doing a circle from and to it. This meant I created a great screenshot from my Map My Walk app that also gave me good figures of distance, time achieved and also calories burnt – even if we take them with a pinch of salt.

Obviously the long walk gave me an excellent step total of over 21,000 steps as shown below in the Jawbone Up2 screenshot. 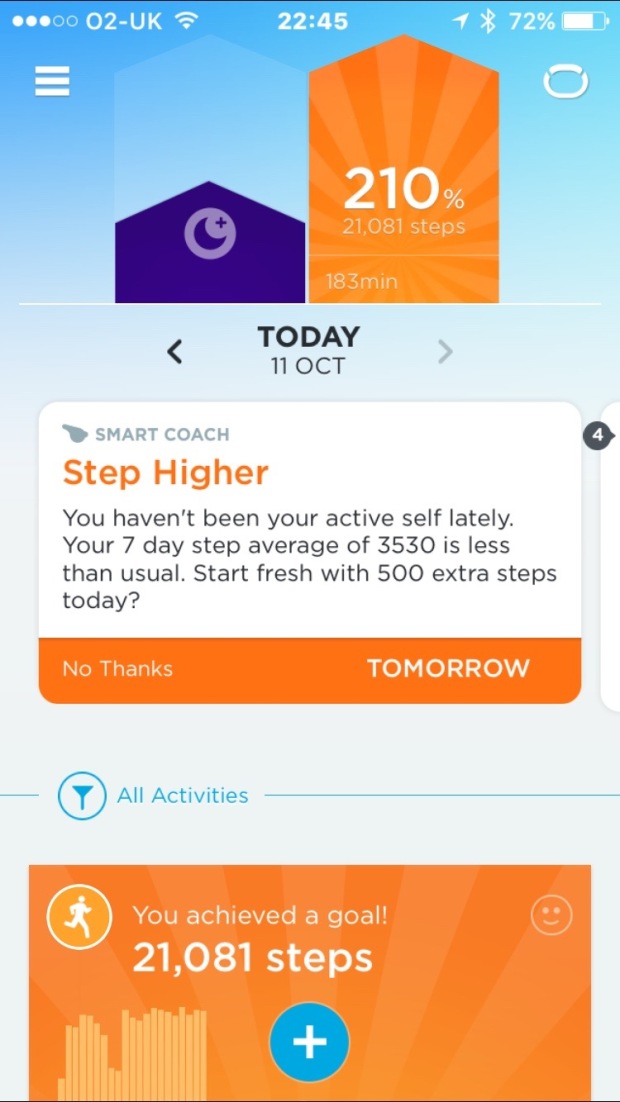 All of which left me feeling as though I had achieved target for the first time in over two weeks and that feels GREAT!!

21 thoughts on “A Sunday Stroll With Autumnal Tones”